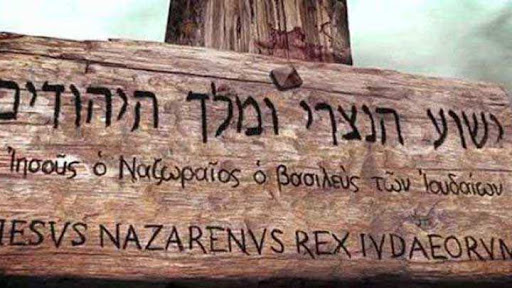 The framer of our destiny is familiar with our denseness. God knows we sometimes miss the signs. Maybe that’s why he has given us so many. The rainbow after the flood signifies God’s covenant. Circumcision identifies God’s chosen, and the stars portray the size of his family. Even today, we see signs in the New Testament church. Communion is a sign of his death, and baptism is a sign of our spiritual birth.

Each of these signs symbolizes a greater spiritual truth. The most poignant sign, however, was found on the cross. A trilingual, hand-painted, Roman-commissioned sign.

Pilate wrote a sign and put it on the cross. It read: JESUS OF NAZARETH, THE KING OF THE JEWS. The sign was written in Hebrew, in Latin, and in Greek. Many of the people read the sign, because the place where Jesus was crucified was near the city. The leading priests said to Pilate, “Don’t write, ‘The King of the Jews.’ But write, ‘This man said, “I am the King of the Jews.” ’ ” Pilate answered, “What I have written, I have written.” (John 19:19–22)

Why is a sign placed over the head of Jesus? Why does its wording trouble the Jews, and why does Pilate refuse to change it? Why are the words written in three languages, and why is the sign mentioned in all four Gospels? Of all the possible answers to these questions, let’s focus on one. Could it be that this piece of wood is a picture of God’s devotion? A symbol of his passion to tell the world about his Son? A reminder that God will do whatever it takes to share with you the message of this sign? I suggest that the sign reveals two truths about God’s desire to reach the world.

There is no person he will not use.

Please note that the sign bears immediate fruit. Remember the response of the criminal? Moments from his own death, in a maelstrom of pain, he turns and says, “Jesus, remember me when you come into your kingdom” (Luke 23:42). What an interesting choice of words. He doesn’t plead, “Save me.” He doesn’t beg, “Have mercy on my soul.” His appeal is that of a servant to a king. Why? Why does he refer to Jesus’ kingdom? Perhaps he had heard Jesus speak. Maybe he was acquainted with Jesus’ claims. Or, more likely, he read the sign: “Jesus of Nazareth, the King of the Jews.” Luke seems to make the connection between the reading of the sign and the offering of the prayer.

In one passage he writes: “At the top of the cross these words were written: THIS IS THE KING OF THE JEWS” (Luke 23:38). Four quick verses later we read the petition of the thief: “Jesus, remember me when you come into your kingdom.”

The thief knows he is in a royal mess. He turns his head and reads a royal proclamation and asks for royal help. It might have been this simple. If so, the sign was the first tool used to proclaim the message of the cross. Countless others have followed, from the printing press to the radio to the stadium crusade to the book you are holding. But a crude wooden sign preceded them all. And because of the sign, a soul was saved. All because someone posted a sign on a cross.

I don’t know if the angels do entrance interviews in heaven, but if they do, this one would have been fun to witness. Imagine the thief arriving at the Pearly Gates Processing Center.

THIEF:  I just asked Jesus to remember me in his kingdom. Sure didn’t expect it to happen so quickly.

ANGEL:  I see. And just how did you know he was a king?

THIEF:  There was a sign over his head: “Jesus of Nazareth, the King of the Jews.” I believed the sign and—here I am!

THIEF:  That’s right. The sign was put there by some guy named John.

THIEF:  Hmmm. Maybe it was that other follower, Peter.

THIEF:  Then which apostle did it?

ANGEL:  Well, if you really want to know, the sign was Pilate’s idea.

ANGEL:  Don’t be surprised. God used a bush to call Moses and a donkey to convict a prophet. To get Jonah’s attention, God used a big fish. There is no person he won’t use. Well, that about wraps it up. (Stamps paper) Take this to the next window. (Thief begins to exit) Just follow the signs.

Pilate did not intend to spread the gospel.

In fact, the sign said in so many words, “This is what becomes of a Jewish king; this is what the Romans do with him. The king of this nation is a slave; a crucified criminal: and if such be the king, what must the nation be whose king he is?”1 Pilate had intended the sign to threaten and mock the Jews. But God had another purpose . . . Pilate was God’s instrument for spreading the gospel. Unknown to himself, he was the amanuensis of heaven. He took dictation from God and wrote it on a sign. And the sign changed the destiny of a reader.

There is no one God won’t use.

C. S. Lewis can tell you. We wouldn’t like to imagine the twentieth century without C. S. Lewis. This Oxford professor came to Christ in his adult years, and his pen has helped millions do the same. It would be hard to find a writer with wider appeal and deeper spiritual insight. And it would be hard to find a more peculiar evangelist than the one who led Lewis to Christ. He didn’t mean to, mind you, for he himself was not a believer. His name was T. D. Weldon. He, like Lewis, was agnostic. According to one biographer, he “scoffed at all creeds and almost all positive assertions.” Lewis would write that Weldon “believes that he has seen through everything and lives at rock bottom.”

Weldon was an intellectual, cynical unbeliever. But Weldon made a comment one day that rerouted Lewis’s life. He had been studying a theologian’s defense of the Gospels. “Rum thing,” he commented (as only a Britisher can), “that stuff of . . . the Dying God. It almost looks as if it really happened.” Lewis could hardly believe what he had heard. At first he wondered if Weldon was drunk.

And, There is no language God will not speak.

The message was the same, but the languages were different. Since Jesus was a king for all people, the message would be in the tongues of all people. There is no language he will not speak. Which leads us to a delightful question. What language is he speaking to you? I’m not referring to an idiom or dialect but to the day-to-day drama of your life. God does speak, you know. He speaks to us in whatever language we will understand. There are times he speaks the “language of abundance.”

Is your tummy full? Are your bills paid? Got a little jingle in your pocket? Don’t be so proud of what you have that you miss what you need to hear. Could it be you have much so you can give much? “God can give you more blessings than you need. Then you will always have plenty of everything—enough to give to every good work” (2 Cor. 9:8). Is God talking in the “language of abundance”? Or are you hearing the “vernacular of want”? We’d rather he spoke the language of abundance, but he doesn’t always. May I share a time when God gave me a message using the grammar of need?

The birth of our first child coincided with the cancellation of our health insurance. I still don’t understand how it happened. It had to do with the company being based in the U.S. and Jenna being born in Brazil. Denalyn and I were left with the joy of an eight-pound baby girl and the burden of a twenty-five-hundred-dollar hospital bill. We settled the bill by draining a savings account. Thankful to be able to pay the debt but bewildered by the insurance problem, I wondered, “Is God trying to tell us something?” A few weeks later the answer came. I spoke at a retreat for a small, happy church in Florida. A member of the congregation handed me an envelope and said, “This is for your family.” Such gifts were not uncommon.

We were accustomed to and grateful for these unsolicited donations, which usually amounted to fifty or a hundred dollars. I expected the amount to be comparable. But when I opened the envelope, the check was for (you guessed it) twenty-five hundred dollars. Through the language of need, God spoke to me. It was as if he said, “Max, I’m involved in your life. I will take care of you.” Are you hearing the “language of need”? Or how about the “language of affliction”? Talk about an idiom we avoid. But you and I both know how clearly God speaks in hospital hallways and sickbeds.

We know what David meant with the words, “He makes me to lie down” (Ps. 23:2 NKJV, italics mine). Nothing seems to turn our ears toward heaven like a frail body. God speaks all languages—including yours. Has he not said, “I will . . . teach you in the way you should go” (Ps. 32:8 NIV)? Are we not urged to “receive instruction from His mouth” (Job 22:22 NASB)? What language is God speaking to you? And aren’t you glad he is speaking? Aren’t you grateful that he cares enough to talk? Isn’t it good to know that “the LORD tells his secrets to those who respect him” (Ps. 25:14)? My Uncle Carl was grateful that someone spoke to him. A childhood case of the measles left him unable to hear or speak.

Nearly all of his sixty-plus years were lived in stony silence. Few people spoke his language. My father was one of them. Being the older brother, maybe he felt protective. After their father died, perhaps he felt he should take over. Whatever the reason, my dad learned sign language. Dad wasn’t an avid student. He never finished high school. Never went to college. Never saw the need to learn Spanish or French. But he did take the time to learn the language of his brother. Let Dad enter the room, and Carl’s face would brighten. The two would find a corner, and the hands would fly, and they would have a great time. And though I never heard Carl say thanks (he couldn’t), his huge smile left no doubt that he was grateful. My dad had learned his language.

Your father has learned to speak your language as well. “It has been given to you to know the mysteries of the kingdom of heaven” (Matt. 13:11 NKJV). Think a word of thanks to him would be appropriate? And while you’re at it, ask him if you might be missing any signs he is sending your way. It’s one thing to miss a message from your wife about cleaning up a room. It’s something else entirely to miss one from God about the destiny of your life.

The Mission of God